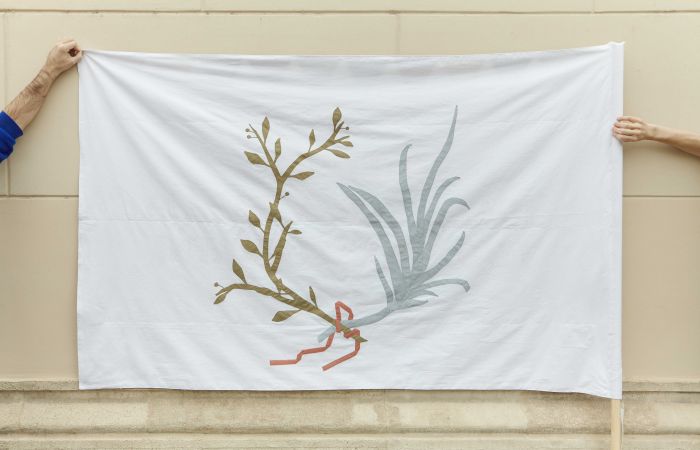 In the Hungarian War of Independence of 1848-1849 forty percent of the troops fighting for independence of the Kingdom of Hungary had different mother tongues than Hungarian.

This flag, that models upon its 19th century counterparts, commemorates the alliance of the sibling nations for the common homeland.

The textiles were dyed by textile artist Niki Szakács using only native plants of Central Europe. Some of these plants have lived here before humans appeared while others were introduced to the local flora by humans. The red of dyer's madder, the blue of privet, the yellow of goldenrods and the green of buckthorn are different from the bright colours of the flags dyed with imported plant-based or synthetic dyes. These are the region’s colours.

On one side of the flag you can read a quotation by István Széchenyi: ONLY THE HOMELAND OF THE RIGHTEOUS WILL THRIVE. We found this sentence thought-provoking and thought it had a potential to engage in dialogue with the viewer in public space. What constitutes righteousness that is for the good of a homeland, country or society and that is indispensable for advancement? Is it possible to find common ground and cooperate if we have different concepts of fairness? What does thriving refer to? The economy, people, land, knowledge, wellbeing? Which reading of advancement or growth is positive?

On the other side are a laurel and a palm branch tied together by a ribbon at the stem, the only elements we kept from the typical 1849 military flag, that displayed these plants on two sides of the coat of arms.