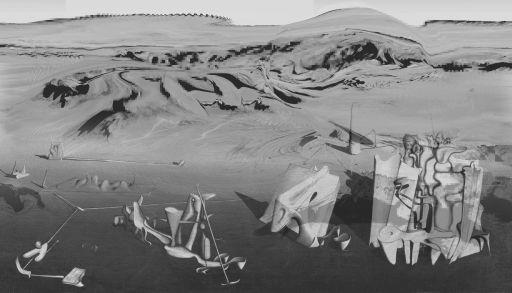 The Pit and the Pendulum

An exhibition painting a rather non-paradisal vision of the future is opening in the gallery level of the "Reggeli" in Pécs. The exhibition is organized on the Berlin-Leipzig-Toronto-Budapest axis, most of the artists live and work abroad, their art reflects on local and global problems. The exhibition is accompanied by a music and literary program.

What are our views if we look at the future of our civilization today? What is the way out of the social crisis which extends between the anthropocentric world and the overwhelming technological singularity? The attempts to save the cultural fossils of the past, the worship of historical ruins, the ideological approach of human values, and the possibilities of posthuman tendencies and artificial intelligence have created an age full of crises.

Is it not an illusion to control technology and nature? The time of keeping appearances is over and the collapse is near. Future scientist are offering technological as well ecological questions, and their conjectures are often proven as real. But to the question of what the roll of humanity in the upcoming ages is we can provide utopian and dystopian answers as well. What kind of positive models do we know about that are more working for the survival of civilization or even prefer more radical methods? Do DIY movements, the neo-hippy colonies or activists offer any useful recipe for us?

The exhibition has essentially three parts. It's spine is an experiment where we examine through some chosen artist's content what is their major interest: the culture of ruins the anthropological examination of fossils? Or the frog jumps of the technological singularity of the anthropocene? Furthermore we are calling a temporary micro-community together which deals with possible future scenarios with the language of contemporary art and with the help of philosophical/esthetical narratives, in this way  creating an attempt at saving the global situation in a locally accessible conversation. Parallel with this we will publish a limited fanzine which will include the texts of the participants in a glocal context.

Edgar Allan Poe: The Pit and the Pendulum, 1843. The title of the exhibition, the conversation and the fanzine is given by Poe's visionary, claustrophobic novel. The organizers found it as a perfect abstract starting point in relation with the happenings of our nightmarish present, but the text does not give any relation to the aspect of the future, moreover it is so intense for the consciousness that the writer doesn't let us to see into it.