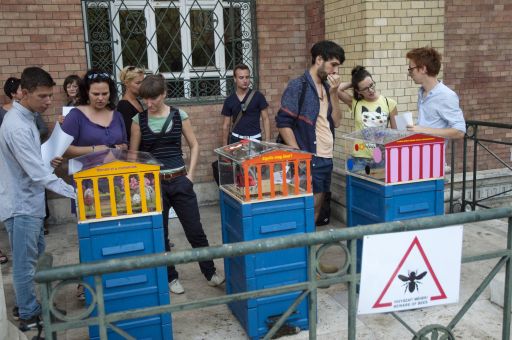 In 2013 the Frankfurt-based finger group (Florian Haas/Andreas Wolf) and the curator Katalin Erdődi opened Budapest’s first urban beeyard on the back terrace of Kunsthalle, combining contemporary art with community engagement. They started a “mixed bee group” which gave around 40 people—with different backgrounds and living situations—a chance to learn about urban beekeeping and take care of three bee families with the help of a local beekeeper. On top of the beehives a “New Museum for Bees” was opened for six weeks, welcoming visitors with thematic, bee-scale exhibitions. Do bees do democracy better than we do? Should we eat them? The exhibitions explored the parallels of human and bee societies: they discussed honeybee democracy and swarm intelligence to address on-going political changes, and focused on the urgency of the global food crisis by starting a public vote about eating insect meat. By founding a new museum, the artists also aimed to react to the situation of the Kunsthalle, an art institution on the verge of losing its autonomy, as well as the plans to build a new museum quarter in the nearby City Park. What kind of museums for what publics? Can an art institution keep its autonomy and become self-sustaining—e.g. by producing honey on its premises?

With essays, interviews, poems, honeywine recipe and a map of Budapest’s prime bee feeding places, the final publication of Social Honey gives insight into these artistic and beekeeping practices.

A publication launch in collaboration with finger group, the curator Katalin Erdődi, members of the mixed bee group and Christiane Erharter (curator, Vienna), whose lecture on “Bees in Art” will situate Social Honey in a broader artistic context. The event will end with an open discussion, spiked with honey-tasting and honeywine spritzer!

The publication launch is supported by the Erste Foundation.