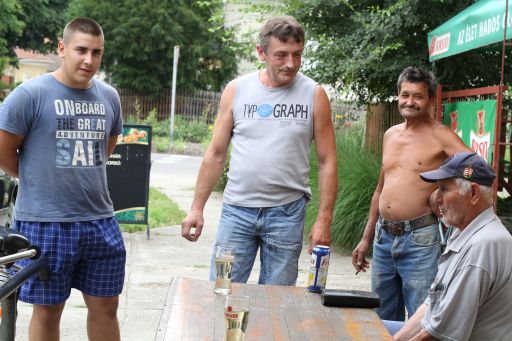 Stranger in the Middle of Nowhere

A foreign tourist is murdered in a small Hungarian town. The news shocks the public. Rarely does it happen that tourists are murdered in Hungary, and even more rarely do we hear about tourists visiting the Hungarian countryside, especially not backpackers. It is also not considered to be ’typical’ that a tourist would settle down in a tent, in nomad-like conditions next to a railway station behind selective rubbish bins in the middle of a nowhere town in Hungary, and spend weeks in this same place.

And the tragic story did not transpire in one of Hungary’s dark places where misery and deep poverty are abundant. The place itself is a nicely developing small town where tourism is flourishing, and some major corporations also contribute to the town’s wealth. Misery is not hopeless and endless. At the same time, there are plenty of orphans living with foster parents. The local opinion holds the murder as a shameful yet chance event; they are mostly shocked by the fact that the small town has come into the spotlight of the media because of this bloody case.

The exhibition does not only focus on the stories of the victim and the murderers, but also on the small town itself and its citizens. Can it really be just a case of bad luck that such a horrible event can happen? Who bears responsibility? The murderers? The victim? Or society itself? The goal of writer Judit Hidas' and visual artist Lilla Szász’s collaborative project is not to recall everyday reality in a documentary-like way: the story presented at the exhibition incorporates numerous fictive elements as well.