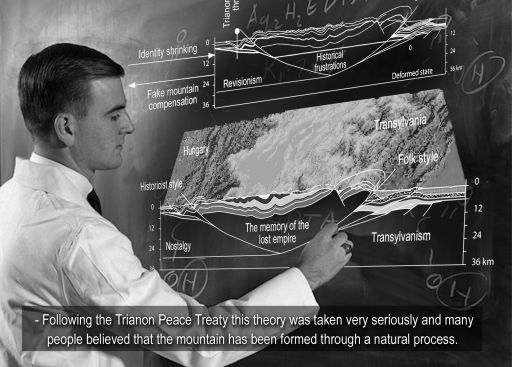 Szabolcs KissPál’s installation examines the nature of political ideologies. As a case study, it aims to reveal the historical antecedents to which the current Hungarian state traces back its concept of the nation, and how it enforces this in society. The artist leads the viewer along three narrative threads from the irredentist movements of the mid-war period to the current state religion and its allusions to blood and motherland, which is also laden with pagan overtones.

The first thread is presented through a documentary film interwoven with fictitious elements, with the artificial cliff at the Budapest Zoo placed in its center, which was constructed in 1912 in the image of Egyeskő (Piatra Singuratică), a mountain peak in Transylvania. The copy of the mountain peak is shown in the film as epitomizing a sense of mourning for the truncated Hungary according to the terms of the Treaty of Trianon. The second docu-fiction video analyzes the Turul myth and cult from its unfolding to the present day. Having also served as a significant reference at the disposal of the non-coalition government that has governed Hungary with a two-thirds mandate during the 2000s, the Turul, a mythical bird of prey symbolizing the savior of the nation, emerges as the religious/ideological/historical buttress of an image of the nation based on delimitation and exclusion. The third part is a collection of films and object-relics constructed by the artist. Arranged in showcases imitating a museum presentation, they call attention to the fact that museum narration and eventually history are artificial human constructions serving the ruling power’s interests in every era.

From Fake Mountains to Faith (Hungarian Trilogy) was produced with the help of the Grant for Media Art of the Edith-Russ-Haus für Medienkunst and Stiftung Niedersachsen. The project, after its exhibitions in Oldenburg, Cluj-Napoca, and Prague, is now presented in Hungary for the first time at OFF-Biennale Budapest.