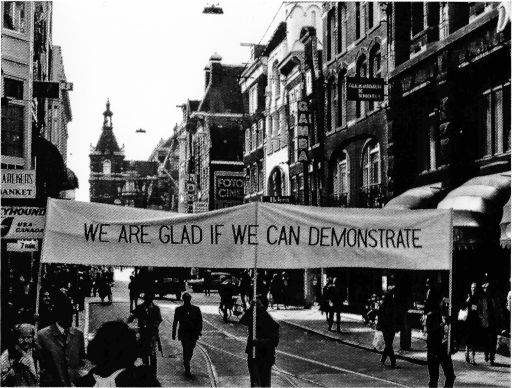 „Örömeim” (Gladnesses) is a reflection of the totalitarian conditions of the 1970s. To censorship, the general claustrophobia, and the oppression felt in every aspect of life, I responded with the absurd euphoria of gladness.

Endre Tót, a cult figure in the Hungarian neo-avant-garde, found a unique way out of the suffocating atmosphere of the 70s, that was nevertheless available to everyone else, namely happiness. Even if this happiness was apparently without a cause.

Many of his works are dedicated to the notions of gladness and nihilism, in other words to the idea of the zero. Belonging to this group of works are the Gladness Demonstrations, which were carried out in several European cities – Paris, Amsterdam, and Bonn – in 1979. With the protesters holding banners, that said ’’We are glad if we can demonstrate’’ the demonstrations were genuine gestures of happiness in the autotelic sense, but on the other hand had the clear-cut message that a demonstration of any kind was impossible in Hungary at the time.

Today everyone has the right to protest when in distress, but then again hardly anyone takes to the streets out of their sheer joy. Although it might be advisable to demonstrate in times fraught with difficulties, on the brink of a crisis, we can still rejoice, also as a community. An act of joy and its public demonstration is a snub par excellence to an oppressive political system. In 2013 the protesters at Endre Tót’s Zer0-demonstration marched for nothing, now during Gaudiopolis – The city of joy they will do so to showcase the joy of demonstration itself.